Mid morning and the streets of Rye seemed to be lined with tea and cake shops, the trouble was I only had a few minutes to get a map and head off to Jury’s Gap…

The thoughts of cake lingered but I was quickly brought back to reality with a jolt as I walked around the signs and buildings of the Lydd Army Ranges â€“ there were no red flags so I trusted that the ranges were at peace with themselves and I pressed on passing the hulks of rusting tanks and other assorted vehicles.

I kept to the track through the range, though the footpath might have been closer to the beach but eventually the track petered out and I headed over the shingle bank and down towards the high tide mark. Walking across the shingle was tough going but in places I was lucky enough to find long planks of wood had been washed up and made an impromptu boardwalk which made the going easier.

The view east was dominated by the two nuclear power stations at Dungeness, and to the north a dual line of pylons crossed the Marshes and Levels. I paused only shortly to read the warning signs, and the notice that declared the number of accidents and days since the last stoppage. I could have walked along the shingle but the concrete road next to the fence ensured I made quicker progress and before long I had made it to the two lighthouses at Dungeness Point and passed Derek Jarman’s old house and garden.

It was now a long haul along the coast to Dymchurch with mile after mile of dead straight road stretching into the distance. I think it was probably the furthest I have ever walked in a straight line and it started to become most repetitive. 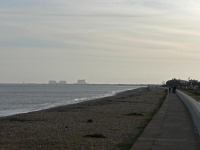 Just behind the beach and the row of houses the 15â€ gauge Romney, Hythe and Dymchurch Railway ran parallel with the shore, but as it was January there was no service operating today â€“ otherwise it would have been very tempting to hop aboard.

I made Dymchurch in good time to find the B&B for the evening, and despite the shingle and walking almost 15 miles I did not cease up completely â€“ fingers crossed for good weather again tomorrow.

See all the pictures from all the days walking here in this gallery.