I only had a few (6) miles to make it from Bembridge back to Ryde, though the bus seemed to take an age getting to Bembridge Harbour this morning. It was rather a misty, moisty, morning – though without the expected autumnal chill. Like a couple of the previous mornings the sea was as calm as a mill pond. 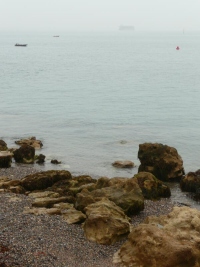 Having crossed the causeway which divided the harbour in two, I had to head inland again across some dew covered fields. The path remained hemmed in at the top of some small mud cliffs, before it descended down into Seaview.

With 3 full days of walking, and 2 half days, I had completed my 65 mile coastal walk around the Isle of Wight. The weather had not been great, but for October it had not been bad. The coastline along the north of the island was not the most inspiring and a better choice could have been the Vectis Trail – which takes in more Areas of Outstanding Natural Beauty to the west and south. Perhaps next time.