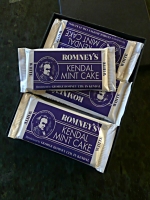 No preparation would be complete without ensuring the emergency rations have been packed. In my case this always includes Kendal Mint Cake.

While not a traditional ‘cake’ this post could be equally at home in the A nice cup of tea andâ€¦ series, though I feel further testing is required before I put a seal on the best Kendal Mint Cake and perhaps had a chance to visit the various establishments in Kendal (there are currently three companies that produce mint cake).

Kendal Mint Cake is the best combination of sugar, water and peppermint oil to be found, and can only be bettered when the chocolate coated variety is at hand mouth. Due to its high energy content it makes for a very good emergency ration.

It was first discovered in 1869 by Joseph Wiper, who began producing it in his small Kendal factory. It is thought that the production was a mistake, and that he was trying to make clear “glacier” mints.

Apart from mine, there have been various notable uses of Kendal Mint Cake through the ages: