Went with Maureen (and Rosie) to walk around Maiden Castle. Thankfully we had the best of the day, it was totally still on the plateau though it did start to rain gently as we headed back. On the way round we spotted a rather large raptor sitting on a fence post – we think it is probably a buzzard.

END_OF_DOCUMENT_TOKEN_TO_BE_REPLACED

Went for a short walk along Chesil Beach near Abbotsbury, and visited Hardy’s Monument, on the way to visit Maureen.

END_OF_DOCUMENT_TOKEN_TO_BE_REPLACED

Spent a week or so in Dorset in mid November 2007. Visited David in Sherborne and Maureen in Charminster, went on a couple of short walks, and met a giant.

With almost clear blue skies, and after most of the thick overnight frost had gone, David and I headed off into Wiltshire for a bit of a walk. We headed towards Charlton Down and the steep northern escarpment which overlooks the valley of the River Nadder. At this point little did we know that the area was famous for more than the spectacular views.

END_OF_DOCUMENT_TOKEN_TO_BE_REPLACED

Went to Sherborne to visit David for a few days, and went on a little tour round Sherborne and Chantmarle (which is now a very upmarket hotel and restaurant but was a Police Training College in David’s day where he learnt all his policeman’s stuff).

On the way back from Chantmarle we came back through Cerne Abbas, with its chalk figure – one of the more famous (and perhaps controversial) chalk figures.

END_OF_DOCUMENT_TOKEN_TO_BE_REPLACED 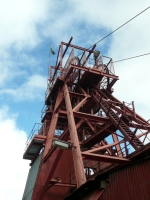 The weather we had experienced at the top of Pen-y-Fan now seemed to have reached us in the valley. This morning was not a time to be outside. We headed off to Big Pit.

Big Pit is a real coal mine, and above ground felt strangely eerie – like an enormous ghost of the industrial age was still present from a time when the site was in full production.

It has stopped producing coal and now allows visitors to be guided around some of the underground tunnels. All of the guides are miners who have at least 5 years experience of working underground, their enthusiasm and passion for mining was almost overwhelming while being most engaging.

END_OF_DOCUMENT_TOKEN_TO_BE_REPLACED 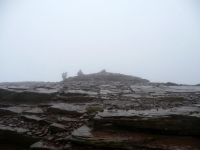 Tim invited me along to another walking trip with the NIMR hill walking club, this time to the Brecon Beacons.

It was late on friday night when we passed over the River Severn and paid our Â£5.10 to get into Wales. Why is it Â£5.10 and not an even Â£5 which would be so much easier? What was the need for all those 10p pieces? are the Welsh trying to undermine the GBPÂ£ by hording all the 10p coins??

We continued on, passing Merthyr Tydfil and up into the Brecon Beacons – and it started to rain. We caught up with the minibus from NIMR and spent a little while in sunken lanes looking for the bunkhouse…

The morning was overcast, and the cloud was getting lower as breakfast was eaten and discussions continued about the walking options. Eventually we all started to head off to Pen-y-Fan, the highest point in South Wales.

END_OF_DOCUMENT_TOKEN_TO_BE_REPLACED

I only had a few (6) miles to make it from Bembridge back to Ryde, though the bus seemed to take an age getting to Bembridge Harbour this morning. It was rather a misty, moisty, morning – though without the expected autumnal chill. Like a couple of the previous mornings the sea was as calm as a mill pond.