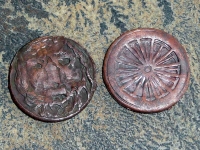 Each kist and merk celebrates the heritage of the place in which is it hidden. All the merks were minted by hand from lead and copper, though it was said that some were minted in gold or silver.

The kists were all very close to the path, each one had a different design, and though never completely buried they are cleverly disguised and quite easy to miss (I did find almost all of them – though some were only remains and not worth a picture, or it was too wet to get the camera out). You did get some assistance, the word ULTREIA on waymark post meant a kist was nearby.

I met one of the Southern Upland Way Rangers on my travels, and he said that hopefully something will be developed soon to replace the waymerks. I hope it does as it really added to the experience of the walk.