It was the third day of 18 miles of walking, my legs were just about getting into a stride and I hoped not to repeat the mistake of yesterday to walk several miles further. Having diverted to the south I had missed out on the view to the north from Devil’s Dyke yesterday – however I chose the car park with more care today and was rewarded with a glorious view.

Devil’s Dyke
There were 2 rivers to cross today, the Adur and the Arun – so there would be a number of ups and downs along the way. Today it was good to get off the tops, as the wind had changed to blow from the north – and it was a cold north wind that did blow. Shelter however was not great in the valleys, as they just seemed to funnel the wind.

Arriving at the Adur, with a great view of Lancing College on the horizon, I got a bit of a shock – the bridge had been closed. Thankfully the diversion was short as it took in the main road.

Back up on the Downs, and approaching Chanctonbury Hill, I was buzzed by a flight of gliders making the best use of the north wind providing lift as it hit the north side of the downs. At any one time there were seven or eight gliders flying up and down the ridge, some gaining height, others sweeping in low and fast. 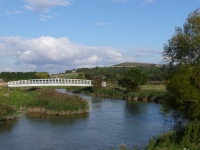 The view across the River Arun Valley was superb, with the small village of Houghton adjacent to the bridge – which was thankfully open.

Even better, the George and Dragon pub was open in Houghton, and they had lit their open fire – the warmth was most welcome as I was chilled almost to the core.