Day 2 started where day 1 had finished. I was in Hartfield and quickly headed off towards Pooh Bridge.

I spent quite a while playing Pooh Sticks, and after so much practice at the proper bridge I considered that I might enter the world championships. Having finished several rounds it was back onto the trail and up the hill, all the way to the top of the forest where you can allegedly see 4 counties (East and West Sussex, Surrey and Kent). I am not sure if I saw all four as the visibility was not great with mist hanging in all the valleys for as far as I could see.

I then headed downhill all the way to Fairwarp, where it was time for lunch. I had made good progress despite the tricky walking and meandering paths and I was looking forward to making it back onto the open forest for better walking after lunch. 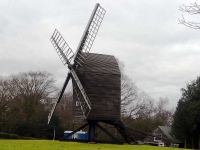 Having passed the Airman’s Grave, it was then off to Nutley Windmill and across the A22 which cuts the forest almost in half.

While the paths across the forest were almost dead straight there were many sections that twisted and turned, I was not making the progress I was hoping for and decided that I was not going to be able to make it to Forest Row as I had hoped. Finding a car park I was able to call again on the excellent taxi service.

In all I had walked 15 miles today, I had obviously spent too much time playing Pooh Sticks! The pedometer read 33,307 and perhaps I need to review the instructions yet again – as it meant that my stride length today was 72cm!