I had been given a copy of a short circular walk (that goes right past the house) when I got the Ouse Valley Way Walk from Per-rambulations. I had been keen to do the walk and when Tim and Helen came down to Sussex for the weekend it was the perfect excuse for a leisurely ramble.

The walk takes in 3 villages (Piltdown, Fletching and Newick) and passes 6 pubs – perhaps I should have chosen a ‘dryer’ walk as it could take a while with Tim and Helen around…

The frost was still fairly thick on the ground when we headed out towards Fletching, though it had not penetrated very far into the ground and our boots were picking up mud quickly. Despite the heavy boots we made it Fletching before the pubs were even open!

By the time we had made it to Newick the best of the day’s weather had been and gone – the sun had been trying its best to burn through the cloud but eventually the cloud won. We had packed pints and pints of tea which helped to take the edge off the dropping temperatures as we took a break on Newick Green.

I was getting off lightly as we passed the 3 pubs in Newick and headed past the church for the second half of the walk. How long would my luck last, there was just one more pub to be passed… 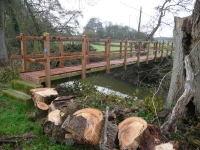 My luck lasted longer than I expected, but not in the expected way. We had to cross the River Ouse just outside Sharpsbridge, and I remembered why I had not tried to complete the walk sooner – the bridge had been closed all summer and autumn! I had not checked to see if it had reopened and it could be a long walk back along the road. It looked very new, but it was completed.

We were over the bridge and stopped at the Peacock Pub in Piltdown. From there it was only a short stroll across the golf course, and we were back in time to watch Wales get beaten by South Africa in the rugby. A most satisfying day. (Did I mention Tim and Helen are both Welsh?)!