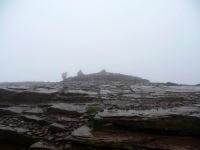 Tim invited me along to another walking trip with the NIMR hill walking club, this time to the Brecon Beacons.

It was late on friday night when we passed over the River Severn and paid our Â£5.10 to get into Wales. Why is it Â£5.10 and not an even Â£5 which would be so much easier? What was the need for all those 10p pieces? are the Welsh trying to undermine the GBPÂ£ by hording all the 10p coins??

We continued on, passing Merthyr Tydfil and up into the Brecon Beacons – and it started to rain. We caught up with the minibus from NIMR and spent a little while in sunken lanes looking for the bunkhouse…

The morning was overcast, and the cloud was getting lower as breakfast was eaten and discussions continued about the walking options. Eventually we all started to head off to Pen-y-Fan, the highest point in South Wales. 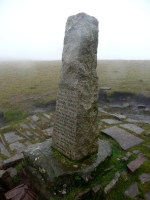 By the time we were up to the Obelisk the wind had picked up to gale force and the cloud was very low. I even had to find my woolly hat!

Perhaps heeding the salutary tale from the obelisk some of the group headed off to find lower ground, while others continued up.

The obelisk is a memorial to Tommy, a five-year-old boy who lost his way while visiting his grandparents. It was almost a month before his body was found as his family and the army looked for him in the valley, never thinking that such a small boy would manage to climb so high onto the ridge.

We stopped at Corn Du and found some shelter, at the top of the sheer north escarpment, out of the wind to have lunch. It was then a cheeky little climb up a steep staircase to the top of Pen-y-Fan (886 metres). We did not linger for long in the wind and rain at the top and headed down along the broad path of Cefn Cwm Llwch.

Descending down the long ridge we finally got out of the wind, and some of the more optimistic people in the group even thought they saw a patch of blue sky in the thinning cloud.

It was then a short walk along the road, at the foot of the hills, back to the bunkhouse to dry out.