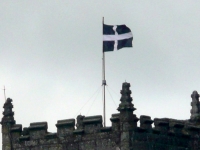 March 5th is the ‘national day’ for Cornwall, named after one of the patron saints of Cornwall, Saint Piran. It is not officially recognised (outside of Cornwall) but petitions have called for it to be made a Cornish public holiday.

Saint Piran was an early 6th century Cornish abbot, supposedly of Irish origin (the Irish were said to have tied him to a mill-stone, rolled it over the edge of a cliff into a stormy sea, which immediately became calm, and he floated over the water to land upon the sandy beach of Perranzabuloe in Cornwall).

St Piran became the patron saint of tin miners having ‘rediscovered’ tin-smelting when his black hearthstone had the tin smelt out of it and rise to the top in the form of a white cross (thus the image on the flag). The flag however also has similarities to the old Breton flag (white flag with a black cross) and also the Flag of Saint David (black flag with a yellow cross).