Went to Sherborne to visit David for a few days, and went on a little tour round Sherborne and Chantmarle (which is now a very upmarket hotel and restaurant but was a Police Training College in David’s day where he learnt all his policeman’s stuff).

On the way back from Chantmarle we came back through Cerne Abbas, with its chalk figure – one of the more famous (and perhaps controversial) chalk figures. 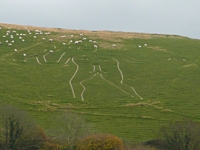 The Cerne Giant is nearly 60 metres tall and 51 metres wide, and one of three ancient figures cut into the chalk downlands (the others being the Long Man of Wilmington in East Sussex, and the Uffington White Horse in Berkshire).

The origin of the figure is unknown. Some believe he is the Roman god Hercules and is over 1,500 years old.Â  though others suggest he is just 350 years old and a giant caricature of Oliver Cromwell – as there are no references to the giant in any historic documents until 1694.

More pictures from my trip to Dorset can be found in the gallery here.