Built originally as a country home in the 15th century, the moated red-brick Castle is most impressive. As is the avenue of sweet chestnut trees that date from the 1700’s, the walls of the Elizabethan walled garden, and a number of sundials in the formal gardens.

In 1946 the Admiralty bought the estate for the Royal Greenwich Observatory, and it became an important scientific institution for the next 40 years (until 1993 when it was acquired by Queen’s University of Canada, and is now an International Study Centre attracting students from around the world). 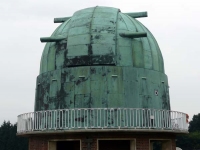 The Observatory Science Centre occupies the buildings that were the site of The Royal Observatory. The tour of some of the domes and telescopes highlighted how it was a world leading astronomical site for many years, though nowadays it is at the forefront of making science accessible with an excellent range of hands-on exhibits, activities and science shows. While children need to be accompanied by adults, thankfully as an adult I was able to play with the exhibits quite happily unaccompanied (it looked like all adults, parents and grandparents were having a great time too).