Went for a short walk along Chesil Beach near Abbotsbury, and visited Hardy’s Monument, on the way to visit Maureen. 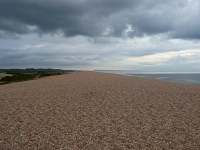 Chesil Beach is one of the finest pebble beaches in the world – formed in the Holocene period over 6,000 years ago when it was pushed onshore by rising sea levels. The actual origin of the beach though are still a matter of scientific speculation. Some believe that the pebbles were gathered up from the floor of Lyme Bay, while others think they originated from landslides that formed in the West Dorset and East Devon cliffs during the last Ice Age. Either way it is an impressive beach, 29 km long and up to 15 metres high it is calculated to contain 100 million tonnes of pebbles. The pebbles grade in size from pea gravel at the western end to potato sized cobbles at the eastern end – and it is said fishermen can tell their position on the beach by the size of the shingle. 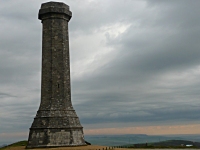 Hardy’s Monument was erected by public subscription in 1844 in the memory of Vice Admiral Sir Thomas Hardy (Flag Captain to Lord Nelson on HMS Victory at the Battle of Trafalgar). It is open during the summer, and the views from the top (22 metres up) are said to be superb. Perhaps next time.