The view over the reservoir during breakfast was most appealing, and it was just a quick walk down the hill to rejoin the Pennine Way – thankfully I had listened to the instructions from the B&B as the path went through what looked like a drain under the old railway line…

The weather was sunny, warm and very humid, and starting the walk up to Laddow Rocks the cloud was thickening and it started to rain slightly – but it passed on quickly and I was soon able to take a break at Black Hill, so named due to the large black peat bogs. Thankfully again the path was well made of flagstones, otherwise it would have been much more difficult going.

The next stretch was fairly bleak, though there were a few grouse to be heard and seen while I descended down and then ascended up to the road at Wessenden Head – from where the path snaked round and down alongside 2 small reservoirs. 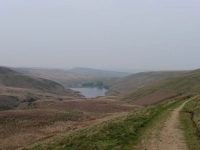 From the bottom of Wessenden Reservoir the route has changed in recent years, forcing you to cross the river further downstream with a very steep descent and a tricky looking long climb back up towards the moorland. Despite the warning signs I took the old route! This headed off along the dam wall and contoured around the hillside to rejoin the new route half way up its long climb. It was slightly longer, though I did get a boot full of water while crossing a stream.

Thankfully the moorland flattened out over Black Moss as the path passed by 2 more reservoirs and turned left at Redbrook Reservoir. The walking had got easier and I started to dawdle a little as it was only just mid-afternoon, I even contemplated heading on down to the pub next to Redbrook Reservoir – though I soon got a move on when a loud clap of thunder rang around the hills and the sky darkened over Standedge.

I headed off downhill from Standedge to the B&B at Bleak Hey Nook, timing it just right – the rain started just as I was drinking my first cup of tea and eating a piece of cake in the garden. It was a good end to the second day.