While the Pennine Way seemingly wandered around the farmland to the north of Slaggyford with seemingly little purpose, I decided to stick to the easy walking of the dismantled railway for a mile or so to near Knarsdale, before rejoining the route which is also shared with the Maiden Way and the course of an old Roman road.

After a brief excursion back up onto moorland the path descends again into farmland, before rising once more onto a more significant piece of moorland across Featherstone and Blenkinsopp Commons.

While the sun was out the very strong easterly wind made progress much harder, lets hope it drops tomorrow as I will be heading almost due east along Hadrian’s Wall. 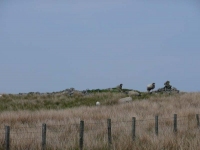 The route across the commons was one of the trickier sections to navigate; all of a sudden the path just vanished and there were very few landmarks and points of reference to go by. Using a bit of dead reckoning, and sheep tracks to navigate through the more marsh areas, I eventually came to a fence line and followed it almost due north – finally picking up the cairns and trig points marked on the map to confirm I was in the right place.

As the path and the way ahead started to become clearer it entered another marshy area, thankfully it had been very dry so it was only slightly squelchy underfoot.

While the route has to cross the A69 (not a pleasant crossing) it then tries its best to skirt around Greenhead. Thankfully it makes for Thirlwall Castle – an early 14th century fortified house, with turrets and a five storey tower, and built entirely out of stone from Hadrian’s Wall (which might explain the lack of walling in this area!) – and a really nice tearoom to end a day’s walking.