Having spent the night in a B&B 2.5 miles south and downhill from Keld (in the beautiful village of Thwaite) I was keen to get a lift back up the road in the minibus which was collecting my bag. Unfortunately it arrived just as breakfast did, it was a hard choice but with toast in hand I climbed on board. 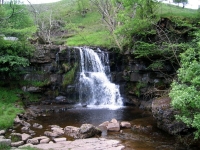 A few steps along the Pennine Way, to cross the river, and I was back on the Coast to Coast heading east past one of the waterfalls which Keld is famous for. It was here that I saw the first primroses next to the falls.

I took the high route today, through the almost alien landscapes left from mining, and it was up via Crackpot Hall and along to Swinnergill and the old lead mines and workings. The fells were swathed in bluebells, though from afar they also looked like patches of mine workings. 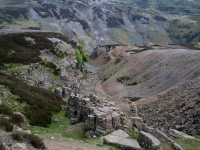 It was not long before I arrived at Lownathwaite mine and the North Hush (where prospectors of old would artificially dam a stream to build up a head of water, before releasing it all at once to strip away the vegetation and scour the ground to reveal any mineral deposits – it is so named because of the silence, hush, when all the water is gone). 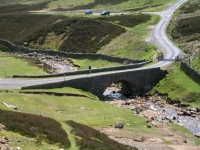 For the next 5 miles or so it was not the prettiest route, scarred by mining, and the wind was blowing hard on top of the moor – thankfully it was a westerly and it helped me along a bit. Perhaps next time I will take the route through the valley.

Reaching Surrender Bridge the landscape was back to recognisable Yorkshire Dales, and I spotted my first Grouse – quickly followed by my second and third on the southern slopes of Calver Hill.

A couple of miles on and I was in Reeth Village well before 2.30pm, though the first tea shop / bakery delayed me for a while before finding the B&B for the night.

Emergency rations: None
Blisters: No more
Aching bits: The usual