With bags packed early and another delicious breakfast I was off with clear blue sky, a few fluffy white clouds, and a warm sun.

First stop was the chemist, as I needed to hit the Benylin! A slug of medicine later I was off and quickly catching up with the Gang and Australian Ladies.

The road was steep but I was quickly round the top of Hartley Quarries with good views of Kirkby Stephen. However my attention was focused on Nine Standards as this was my first objective of the day.

Having reached them I could work out why it had taken so long to get to the top – the cairns are massive, giving the impression that they are much nearer and just on the next ridge over.

Thankfully I was the fifth person to arrive, it allowed me to see the cairns in all their glory. By the time I was leaving some of the Gang were fast approaching, and looking back I could see a swarm of people all around the cairns. 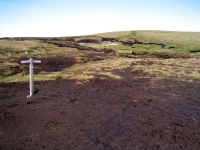 Travelling south it was a nice easy walk over unbroken turf, but then all around White Mossy Hill the peat bogs were broken and scarred by large gullies which were hard to pick a way through.

It was a long slog but finally the path took us east into Whitsundale and the path went above the northern edges of some beautiful limestone scars with the river below.

It was a hot afternoon by now and the shelter offered by the trees at the top of the scar was most welcome, and I enjoyed the sunshine accompanied by bluebells which were thriving in the cool shade. 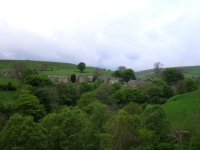 Dropping down from Cotterby Scar, and on to the road, the path crossed a high road bridge with good views back up the scar and river.

Then it was to Keld and the halfway point of the Coast to Coast.

The real sting in the tail of a fairly long stage was the 2.5 mile addition to reach the B&B in Thwaite. It is a lovely village and I was thankful this afternoon that it was all downhill from Keld. I celebrated with a couple of ice creams in the afternoon sunshine when I arrived and let my boots dry in the sun.

Emergency rations: None
Blisters: No more
Aching bits: With the descents today the knees are a bit sore