The cloud was high as I set off this morning, with patches of blue sky. The wind had also dropped overnight.

The first part of the walk out of Orton was on roads and tracks through improved pasture, passing a stone circle on my right I could see it had been augmented with sheep and their lambs.

By this time I had caught up with the Australian Ladies, and a little further towards Tarn Moor I found the Gang who were heading north. I had decided to take the more southerly route through Ravenstonedale Moor, with its views back to Sunbiggin Tarn, because it reduced the amount of road walking. 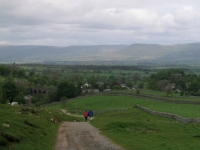 Back on the main route, and to the south of Great Ewe Fell, it all started to go wrong… The next couple of miles were easy walking and very sociable with plenty of horse riders out in competition. But I had found the wrong wall and because the going was easy and the (correct) route looked very simple I was not paying enough attention to the map. Silly boy. Alarm bells should have started ringing when I spotted a viaduct to my right (it should have been a different viaduct to my left!), but it was a viaduct and I remembered I would be coming across one during the walk but it should not have been this one, and I should not be standing underneath it! I had made it to Crossby Garrett a couple of miles north off the route.

Thankfully I did not have to retrace my steps completely, but it was still a couple of miles to make it back to the route which I rejoined at Smardale Bridge – with its great view of the right viaduct! It was here that I caught up with the Gang for a second time in the day.

Over Smardale Fell and I was dropping down through rough and then improved pasture all the way into Kirby Stephen – where I was staying overnight.

Emergency rations: None
Blisters: One on the end of my second toe (right foot)
Aching bits: Knees