I made a prompt start this morning, leaving Glenridding just after 8am. The weather was overcast but the steady rain was falling vertically. By the time I had made it to Patterdale the rain had paused slightly and I could see the clouds were racing over the tops of the fells ahead of me.

It was not until I was at Chapel in the Hause that I was exposed to the full gale blowing across the top. Until I made it down to the other side (a couple of hours later I was to be blown off my feet 3 times). 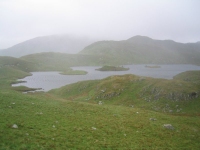 Reaching Angle Tarn Pikes I could see several tents alongside the tarn – their owners trying to pack them away before they blew out of their hands. Angle Tarn itself looked angry, almost boiling. The waves, bedecked with white horses, were crashing into the shore.

By now the rain had set in heavily and I was walking through low cloud. The rain was coming in horizontally and it felt as though I was being hit by burning hot needles. It was head down and make for the Straits of Riggindale, where the path could turn so my back would be to the wind, as fast as I could make it. No views were to be had other than the path in front.

Finding the cairn at the Straits I made a quick left – forgetting all thoughts of making a short detour higher into the cloud to make it to the top of High Street – and was blown along to the top of Kidsty Pike which is the highest point on the Coast to Coast route. 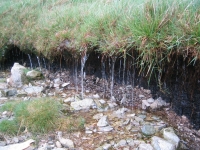 The descent down to Hawswater was fairly tedious, down a slippery grass slope for a couple of miles.

The sun was shining some distance away, and as I got to the path that would take me alongside the reservoir it had just about arrived overhead through broken cloud.

For the 4-5 miles along the reservoir my shadow joined me again in places for the first time in a couple of days walking – I was worried it had got lost in the low cloud of Helvellyn, or fallen off the edge of Striding Edge.

Having reached the dam I peeled off north from the path to find my digs for the evening in Bampton Grange, while the Coast to Coast route headed southeast towards Shap – my first objective for tomorrow.

I was getting rather despondent about how far the Crown and Mitre pub might be, the spotting of a sign to Bampton Grange that took me through a hay meadow lifted my spirits. Though it sure looks like I have left the lakes far behind with this landscape ahead of me.

Emergency rations: Half a bar of Kendal Mint Cake (85g bar)
Blisters: None
Aching bits: Knees and top of thighs – probably from the descent and bracing against the wind.