The final stage into Robin Hood’s Bay on the final day. At just 12 miles I hoped I could get there in time for lunch and a celebratory cream tea.

Within 5 minutes of setting off, and with the B&B still in sight, the sky went black and it began to hail. Not the perfect start to the day, but it did not last long and the weather improved slowly all day.

The last two bits of moor to cross were fairly small, and did not take too much effort. Descending down to the coastal path I rejoined the Cleveland Way (previously left before Blakey Ridge) and headed south along the coast for 3 miles or so into Robin Hood’s Bay.

The wind was again blowing really hard, but it was the spray from the sea soaking me now, even though I was at the top of a fairly high cliff.

With each headland I expectantly searched for any signs of Bay Town, but it was not until the final headland of the bay that the town came into view. 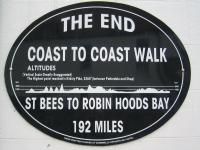 Making my way down the narrow streets I made it to the Bay Hotel and Wainwright’s Bar, which marked the end of the walk. Before entering I went down to the beach to wash the mud from my boots and deposit the pebble collected from St Bees. The tide was almost in so there was no chance of walking along the beach, or looking for crabs in the rock pools along the rocky shoreline.

Now that I was safely at destination I ate the remaining quarter bar of Kendal Mint Cake emergency ration. It also gave me the energy to head back up the hill (1 in 3) and to the host of tea rooms that overlooked the bay.

Emergency rations: The last quarter packet of Kendal Mint Cake sitting on the beach
Blisters: None
Aching bits: None