Ahead the North York Moors, but starting in the Vale this morning the first objective was to make it to the ridge with the masts.

The beginning of the walk was beautiful through open broadleaved woodland, skirting the edge of the more dense coniferous plantation. After a mile or so the Coast to Coast route joins the Cleveland Way, and it is this path that I would be following all day and into tomorrow.

The views from the ridge back across the Vale were fantastic, but I had moorland to cross in glorious weather with just a hint of a breeze making it comfortable going.

After passing across the edge of Scarthwood Moor there were a couple more stretches of woodland, this time with patches of bluebells in the dappled shade of oak and beech trees. It was then up the path to Live Moor, following a pavement of flagstones – not the most comfortable walking but better than walking through and adding to the destructed ground I had experienced previously around Nine Standards.

At the top of Live Moor I caught first sight of the North Sea on the Horizon – it was quite distant, 3 days walking for me. 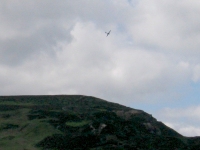 Climbing up and along the ridges I passed the gliding club, and a couple of gliders were in the air making best use of the breeze that rose vertically from the face of the steep escarpment.

From there the path would again drop down into the head of a valley before rising again to the next ridge. There were four of these to negotiate before I would descend south into the Urra valley to find my digs for the night.

Having got to the road, which would have led me to the B&B, I decided to climb up Carr Ridge and walk over Urra Moor to approach the valley from the north east. There were a couple of routes down, I passed the first as the second would be more direct. However the second was not marked, which was about the only path all day that was not! I walked a little further and found another path and headed down a bridleway to the B&B.