A mammoth hike of 23 miles, though there was hardly a climb in sight across the flat plain of the Vale of York, but it was still 23 miles never the less. It was the day that I said would be kill or cure.

After an early breakfast I was heading out of Richmond and straight for the sewage works. Thankfully after the works a short wooded section where a carpet of wild garlic grew helped clear the nose.

Late morning and I was passing under the A1 (two-thirds completed, just one-third remains, as the crow flies), and around the racecourse at Catterick Bridge. 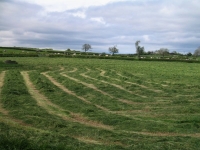 Arriving in Bolton-in-Swale I was well into the Vale of York and its arable crops (mainly wheat and barley) though it was also here that I came across the first field of oil seed on the route. The luminous yellow flowers were mostly over, but the scent of the plants was still very much in the air.

From Ellerton Hall I stupidly made the walk slightly longer by taking a more southerly route to avoid some of the road walking. Back on the route I found the first big obstacle of the day, a railway. Not only had you to contend with the trains, but this was the steepest climb of the day – down the bank, over the tracks and up the other side.

To celebrate making it over in one piece I rested on the eastern bank and had a quarter of the bar of Kendal Mint Cake, hoping it would help my legs get their second wind. 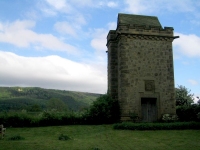 Then I came across the second big hurdle of the day, crossing the A19 dual carriage way at Ingleby Arncliff. It focused the mind slightly with vehicles bearing down at 70 miles per hour (plus some I am sure), with it being around 5pm this could be rush hour. With adrenaline pumping my legs now felt they could do another 23 miles, though the B&B was only a couple of hundred metres further on. Resting on a bench by the water tower, looking at the masts that were on the route tomorrow, the adrenaline quickly faded and I almost seized up.

What was most unfortunate that the pub was half a mile further on from the B&B – downhill into Ingleby Cross. I could have planned that better.

Emergency rations: Quarter bar of Kendal Mint Cake
Blisters: None
Aching bits: Probably legs and feet if I could feel them through the numbing sensation I have at the moment