I had waited for this day for months, the sense of anticipation over the last couple of weeks had been a fantastic buildup, but I dreaded the dawn and a sense of anticlimax due to the poor weather. Having driven from London yesterday, through 6 hours of rain, I woke to find the weather forecast was holding true – it was grey and overcast in Kirkby Stephen, just as the forecasters had predicted.

Thankfully by the time I had been driven to St Bees there was not a cloud in the sky overhead, my spirits soared. The Isle of Man was visible on the horizon, across the Irish Sea, as I carefully dipped my toe in the water and selected the stone that was going to accompany me to Robin Hood’s Bay.

I headed north to St Bees Head, and after an hour or so I was at the lighthouse. The wind had dropped and the white horses that had previously been charging south down the Irish Sea had vanished. Along the cliff top path spikes of bluebell flowers were being replaced with vibrant green fronds of bracken, and young brambles were nipping at my ankles. 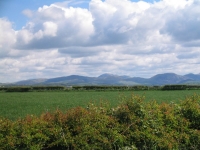 Turning inland for the first time the primary objective of the day – Dent Fell – was visible on the horizon. It was a few miles off, and I was taking a short detour along the old railway line to avoid walking along the busy road. It was a slightly longer route but better to be surrounded by clouds of willow and dandelion seeds than vehicles and exhaust fumes.

Having made it to Cleator the gradient steepened and I was on my first ascent, on the way to the top of Dent Fell. Modest in proportion its cairn is at a height of 344m at the top of a fairly steep climb, the summit is a little further on at 352m. I made it to the cairn at 14:35.

Descending down the southern side of the fell, through Uldale Plantation, I reached Nannycatch Gate and a wonderful hidden valley where Nannycatch Beck flowed. Having reached the head of the valley I stopped briefly at a fake stone circle (the stones are real, but the circle is a recent formation). After 14.5 miles Ennerdale Bridge was a welcome sight as it was the end of the first day of walking.

Emergency rations: none
Blisters: none
Aching bits: both legs – from top to bottom (more accuratly ankle to bottom)