Spending a bit of time again in Scotland, and it allowed me to find another delicacy that would go well with a nice cup of tea – Ecclefechan Tart.

END_OF_DOCUMENT_TOKEN_TO_BE_REPLACED

While walking the Pennine Way I was in need of sustenance to keep me going through the day. While I found some good biscuits, cake is less prone to disintegrating (or at least more easily squished back together). Having spent quite a while wandering along the route through Yorkshire I was pleased to find a supply of Parkin, a cake with strong local connections.

END_OF_DOCUMENT_TOKEN_TO_BE_REPLACED

In walking the Pennine Way I spent quite a while within Yorkshire – with the opportunity to try some of the wonderful delights on offer that go well with a nice cup of tea.

I had occasionally seen Yorkshire Tea Biscuits advertised on TV, but never found a good supply of them. In Hawes I was delighted to find numerous shelves fully stocked with a wondrous range of these biscuits, though disappointingly I probably only had room for two packets of biscuits in my rucksack, so I chose the Original and Chocolate Chip varieties – leaving the Oat & Honey and Ginger ones for another time.

END_OF_DOCUMENT_TOKEN_TO_BE_REPLACED

Cornish Fairings truly are ‘A taste that’s out of Cornwall‘, and it is a great shame that they are not more widely available – considering that they have been a Cornish favourite for over 100 years. It was only a few years ago that they almost became an endangered species when the factory was forced to close due to lack of demand – which would have been a great tragedy for Fairings fans. Thankfully someone saw sense and they were rescued.

END_OF_DOCUMENT_TOKEN_TO_BE_REPLACED 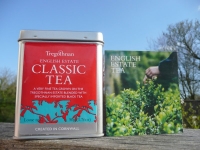 Welshcakes can be traced back in time to one of the earliest forms of baking, where a flatstone would be placed onto an open fire and small flat cakes would be griddled on top of the hot stone.

It is a shame that they are not more widely available outside of their native Wales as they make a fine accompaniment to a nice cup of tea.