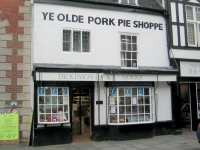 The oldest remaining bakers of authentic Melton Mowbray Pork Pies in the town centre today are Dickinson & Morris, who have been baking pork pies there since 1851. After being refurbished after a fire in 1992 their shop – or as they call it “Ye Olde Pork Pie Shoppe” – can be visited on Nottingham Street. The shop celebrated its 150th Anniversary of pork pie making in 2001, and I am sure not many shops can match that! 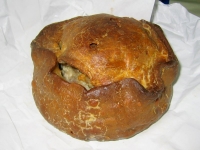 While other pork pies exist the authentic Melton Mowbray Pork Pie has a distinct look and taste, and some might say a distinct reputation – though I am not sure what type of reputation a pork pie might have. 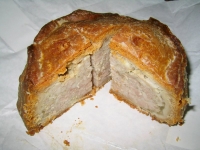 The sides of the Melton Mowbray Pork Pie are bow-shaped (as they are hand raised and baked free standing), using fresh pork, and topped up with jelly before being left to cool. Woe betide anyone who bites into a pie before it is sufficiently cooled as the jelly will quickly escape.

While Dickinson & Morris supply a number of different supermarket chains around the UK with pork pies, and they can be bought online too, the freshness of the pies from their shop in Melton Mowbray cannot be beaten.

Some might be concerned that a pork pie might not go well with a cup of tea, please be rest assured that the finest hot beverage goes well with all quality edible produce…