It is said that you never talk of a ‘Cornish pasty’ in Cornwall. It’s always referred to simply as a pasty…

The delicious savoury parcel is a meal in itself, and doesn’t need to be accompanied by anything – other than a nice cup of tea. The vegetables within, comprising onions, potatoes and swede (called turnip in Cornwall), must be sliced. The meat, usually skirt or chuck steak, should be chopped. The filling always goes into the pasty raw, and baking takes upwards of an hour during which time the filling steams and its flavours blend together – acting to form a gravy. 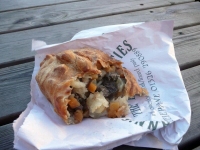 Even in Cornwall there is no consensus as to what type of pastry makes the best pasty. Some say short, others that rough puff pastry is better. Both schools agree that the texture has to be firm enough to hold the filling without cracking or splitting (to be strong enough to endure being dropped down a mine shaft). Traditionally the pasty would be held by the crimped edge, which would be discarded at the end of the meal having become dirty.

The earliest references to pasties date back to the 13th Century, and they have been exported around the world in various forms – wherever Cornish people go pasties soon follow.

3 thoughts on “A pasty or two from Cornwall”