Starting the final leg of the Wealdway at Gover Hill I had just 16 miles or so to get to Gravesend. The first few miles of walking was through a lovely woodland of chestnut coppice and oak standards. It had been the first be of decent production woodland I had walked through on my entire journey. It was not long however until I reached the other side and the view over to the North Downs.

END_OF_DOCUMENT_TOKEN_TO_BE_REPLACED

Today (day 3) started off with quite a bit of road walking so I was able to make good progress on the tarmac of the narrow country lanes. Before long I was high up on Bidborough ridge and the snow started up again – though this time they were large delicate flakes which drifted haphazardly in the breeze.

END_OF_DOCUMENT_TOKEN_TO_BE_REPLACED

Thankfully the strong northerly winds had blown itself out overnight, though the forecast still mentioned wintery showers, as I started out on day 2 from East Hoathly. The frost on the ground had stiffened up the mud just a little, though most of the fields were permanent pasture and not too muddy or slippery underfoot.

I was soon walking through Great Wood, its name the reminder of what was once here. It had probably been decimated several times over the centuries – nearby there are extensive remains of former iron-foundries which would have used the wood as fuel, but more recently the Great Storm of 1987 destroyed much woodland in the area.

END_OF_DOCUMENT_TOKEN_TO_BE_REPLACED

The Wealdway guidebook had been looking lost on my bookshelf for quite a while and, as a very kind lady at Kent County Council had copied it for me as it had gone out of print, I felt it had laid there for long enough. At 80 miles long it would split nicely into 4 parts – as the perfect accompaniment to the Easter bank holidays.

END_OF_DOCUMENT_TOKEN_TO_BE_REPLACED

On my way back from Cornwall I stopped off in Exeter, intrigued to see a city that I have passed by a number of times on journeys to the southwest.

The cathedral was beautiful, and as it has no central tower it has the longest uninterrupted vaulted ceiling in England – there are lots of great pictures of the inside here on Flickr.

On the outside there was someone halfway up a tower working on the building.

Having tried to find shelter from the strong northerly wind yesterday on The Lizard, the promise of better weather today coaxed me out onto Bodmin Moor…

END_OF_DOCUMENT_TOKEN_TO_BE_REPLACED 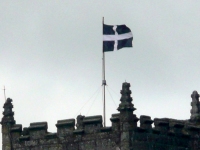 March 5th is the ‘national day’ for Cornwall, named after one of the patron saints of Cornwall, Saint Piran. It is not officially recognised (outside of Cornwall) but petitions have called for it to be made a Cornish public holiday.

Saint Piran was an early 6th century Cornish abbot, supposedly of Irish origin (the Irish were said to have tied him to a mill-stone, rolled it over the edge of a cliff into a stormy sea, which immediately became calm, and he floated over the water to land upon the sandy beach of Perranzabuloe in Cornwall).

St Piran became the patron saint of tin miners having ‘rediscovered’ tin-smelting when his black hearthstone had the tin smelt out of it and rise to the top in the form of a white cross (thus the image on the flag). The flag however also has similarities to the old Breton flag (white flag with a black cross) and also the Flag of Saint David (black flag with a yellow cross).

It is said that you never talk of a ‘Cornish pasty’ in Cornwall. It’s always referred to simply as a pasty…

The delicious savoury parcel is a meal in itself, and doesn’t need to be accompanied by anything – other than a nice cup of tea. The vegetables within, comprising onions, potatoes and swede (called turnip in Cornwall), must be sliced. The meat, usually skirt or chuck steak, should be chopped. The filling always goes into the pasty raw, and baking takes upwards of an hour during which time the filling steams and its flavours blend together – acting to form a gravy.